The Quagga is a subspecies of the Plains Zebra native to South Africa. Although very similar in size to other zebras, it was distinguished by the fact its stripes, which were brown and white, were limited to the front of the body - the rear was brown without stripes. The amount of stripes and how far down the body they go varied between individuals. It is possible that the quagga got its name due to its alarm call.

Although believed to have been quite common, comparatively little is known about the quagga's behaviour, although like other plains zebra subspecies, it probably lived in herds. It was extensively hunted by Dutch settlers due to competition with domestic livestock and was hunted to extinction by 1878. The last known individual died at Natura Artis Magistra zoo in Amsterdam, the Netherlands, on August 12 1883.

The Quagga is an adoptable animal in Wildlife Park and was added as part of the Wild Creatures expansion pack. Like other extinct animals, the quagga cannot be adopted normally at first - instead, it must be bred back by the Burchell's Zebra. Once a foal has been born, other quagga can be adopted.

Quaggas are capable of jumping over low-height fences so a high-height enclosure would be suitable. Their daily needs and enrichments include hay, mineral, water, jumping and running. In terms of environment, they prefer 50% of ground hardness and wasteland plants.

The quagga is an adoptable animal in Wildlife Park 3 and was added as part of the Africa expansion pack. Their daily food and enrichment necessities include grass, mineral, water and jumping. They prefer having a minimum herd of 6, with 30 as the maximum number of herds.

These are the list of diseases that the said animal can suffer from: 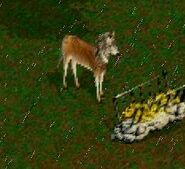 Test render of the Quagga

Test render of the baby Quagga
Community content is available under CC-BY-SA unless otherwise noted.
Advertisement