Welcome to the Wildlife Park fansite and resource on the wikia! We have articles on the latest games, animals and an up-to-date record of the fan community!

Please note that we are trying to make this wikipedia similar to Zoo Tycoon Wikia mostly due to being a simulation game with same theme but different purposes despite being developed and published by different companies.

Help is in need!

We need new articles and improvements for buildings, animals and stuff!

Not sure where to start?

This is where you can news / announcements of Wildlife Park 2 or 3:

B-Alive have confirmed that Wildlife Park 3 will be getting DLCs somewhere in 2016/2017!

B-Alive confirmed that there will be a second DLC and it is expected to be released before 25th of December (Christmas). Achievements are planned as well.

B-Alive gave the first hint for the next DLC, "Probably will be set in an area where gold rush was/is literally at home... ;-)".

The second DLC is named "Alaska" and is expected to be released in August! 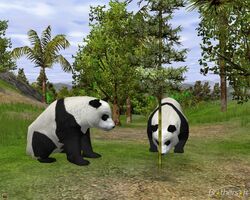 Retrieved from "https://wildlifeparkgame.fandom.com/wiki/Wildlife_Park_Wiki?oldid=4989"
Community content is available under CC-BY-SA unless otherwise noted.